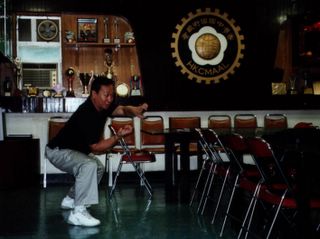 He looks like Samy Choy, the owner of Samy Choy's Holistic Pest Control, who uses his training in martial arts and meditative mind control to extract pests. Many who have observed his work describe his methods as "unorthodox, though highly successful." One satisfied customer explains, "He makes his way around the room grunting, howling and meowing while forming a variety of claws in the air, all while maintaining a rigid squatting position. It's an intense process that can take hours, but his concentration is inhuman! And at the end of the day, I don't know how, but he always comes out with a box full of rodents." Samy has earned an amazing reputation for his service in this arena, making Samy C's Holistic Pest Control hugely successful and almost as profitable as his restaurant, Samy C's House of Mystery Meat, which was recently given highest ranks by Zagat's.